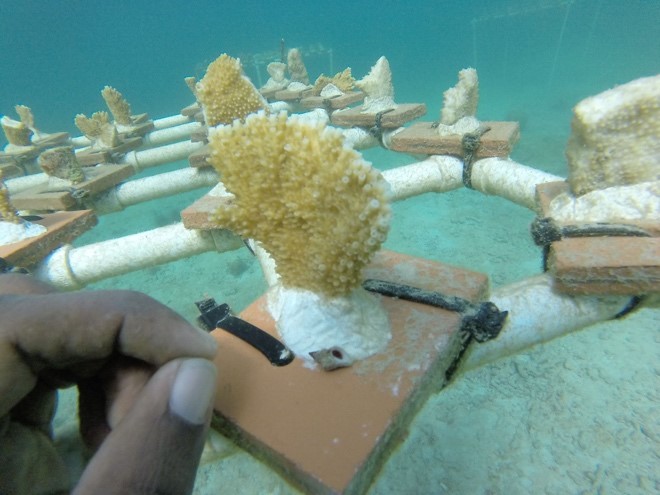 The Fisheries Division of the Ministry of Agriculture, Lands, Forestry, Fisheries and the Environment, through funding support from the GEF/UNDP Ridge to Reef Project continues to make strides in the area of coral reef restoration.

Approximately 300 meters from shore on the North end of the Grand Anse Beach, St. George’s, a mere 3 meters below sea level, lies the site of the Grenada Marine Protected Area Coral Nursery program. The area, which is demarcated by four Pillar buoys bearing the words “Coral Nursery”, is also home to a natural stand of Acropora palmata, a species of coral commonly referred to as Elkhorn coral.

These corals, which acquired their name due to their ‘elk antler-like’ appearance, have been a prominent reef-building coral throughout the Caribbean and was once the most abundant coral species found on coral reefs in the Caribbean and Florida Keys. Sadly, more than 90% of Elkhorn coral populations have been lost due to coral diseases, storm damage, coral bleaching, predation, climate change and human activity. These factors have created a synergistic effect that greatly diminishes the survival and reproductive success of the species; thereby, making natural recovery a slow, seemingly impossible process. Coral nursery initiatives are therefore critical for the rehabilitation of the endangered Elkhorn coral, if there is to be any hope of restoring Caribbean coral reefs to their optimal ecological conditions.

Coordinator of the Coral Nursery project, Mr. Denzel Adams, was contracted by the GEF/UNDP Ridge to Reef Project in July of 2016 and given the task of ensuring that this project is a success.

To get the ball rolling, Mr. Adams procured the materials and equipment necessary for the construction of six coral nursery tables, which he uses to propagate Elkhorn coral fragments from a natural stand that exists in close proximity to the nursery site.

He then subcontracted four community members from the Grand Anse area, all of whom are fishers, to assist in the construction of the tables. Together with volunteers from the Marine Protected Areas Unit, these fishers provided approximately 152 man hours towards the table’s construction and installation.

The tables were installed at the coral nursery site in September, 2016. Following which, they were populated with coral fragments between September and November of the same year. Once the nursery was established, coral fragments were cleaned using knives and wire-bristled brushes 1-2 times weekly to ensure maximum coral growth conditions by preventing algal overgrowth and predation.

To date, a total of 163 coral fragments have been successfully cultured within the nursery at an average growth rate of 14.88 centimeters per year. Of these, 64 corals have been out-planted to coral reefs within the Moliniere-Beausejour Marine Protected Area, at sites adjacent to Moliniere Point and Long Point. These out-planting sites are also monitored and carefully cleaned weekly, as the first year of growth is the most critical for out-plants to cement themselves onto the reef. Any damage sustained during the cleaning process, or from natural factors, would result in setbacks in their growth and development.

Despite its successes, the coral nursery program has not been spared from the threats which plague natural Elkhorn coral populations. Within the nursery site 77 coral fragments (32% of the total population cultured) died as a result of a 2016 coral bleaching event similar to the event which affected 93% of Australia’s Great Barrier Reef coral population. Another 3 fragments were also dislodged from the tables and died due to unauthorized human interference within the nursery. There has also been mortality at the out-planting sites, although it was significantly lower. Four (4) corals (6.34% of the total out-planted population) died after becoming dislodged and smothered by sand during surging sea conditions.

Despite the mortalities, Mr. Adams noted that the Coral Nursery Program has met, and in some instances exceeded, the expectations and targets of the pilot phase. Through financial and logistical support from the GEF/UNDP Ridge to Reef Project, he plans to use the remaining 99 Elkhorn coral fragments in the nursery as propagation stock for expansion of the coral nursery program to new sites within the Grenada MPAs Network including the sister isle of Carriacou. He also envisions a multi-species approach to coral nurseries in Grenada, where the majority of species grown are Acropora palmata (Elkhorn coral) and its “sister species” Acropora cerviconis (Staghorn coral). He further highlighted the need for more experienced coral gardeners to ensure the successful continuation of the program; an issue that is already being addressed by the program’s funders – the GEF/UNDP Ridge to Reef Project, and the Fisheries Division. 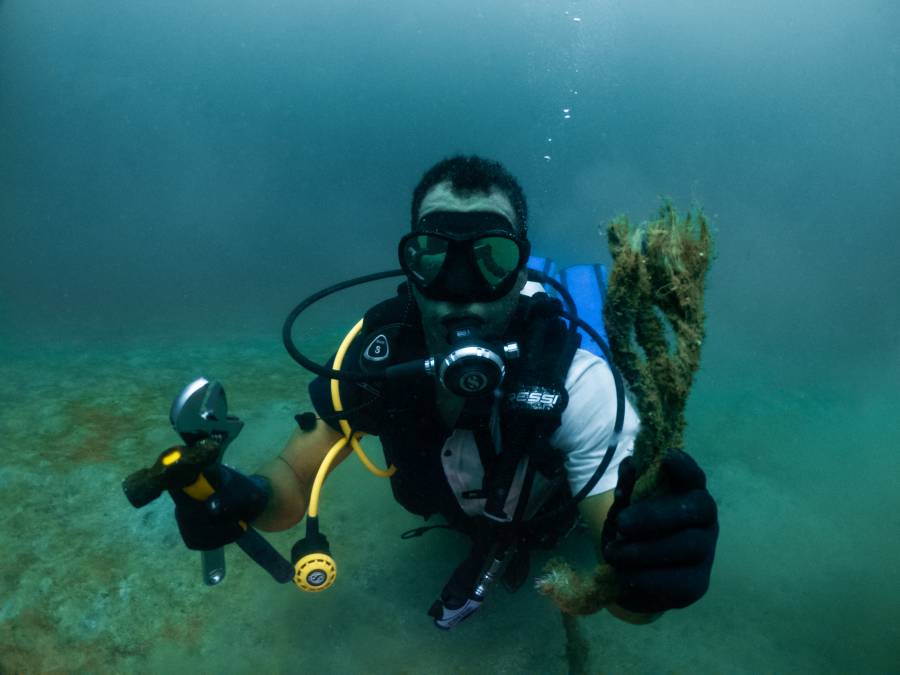 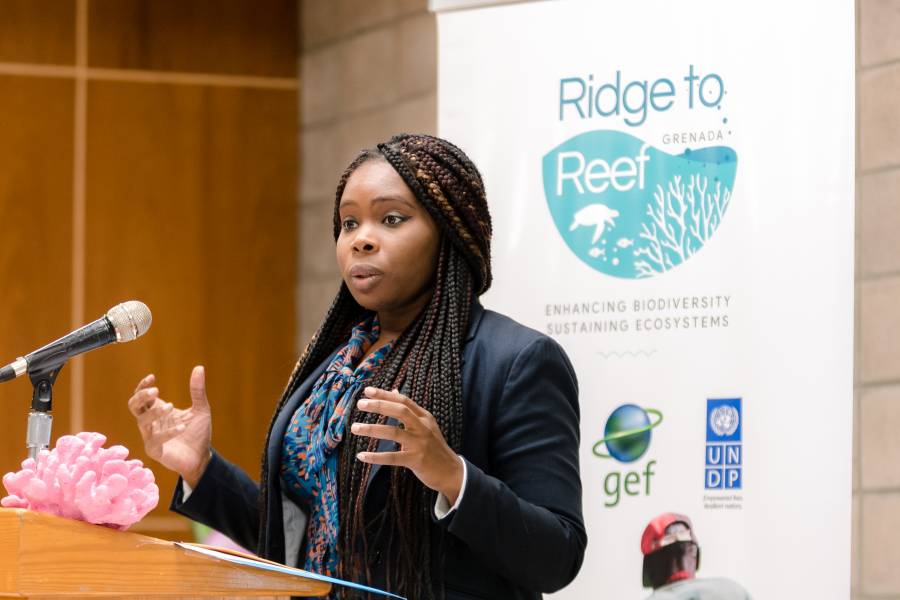 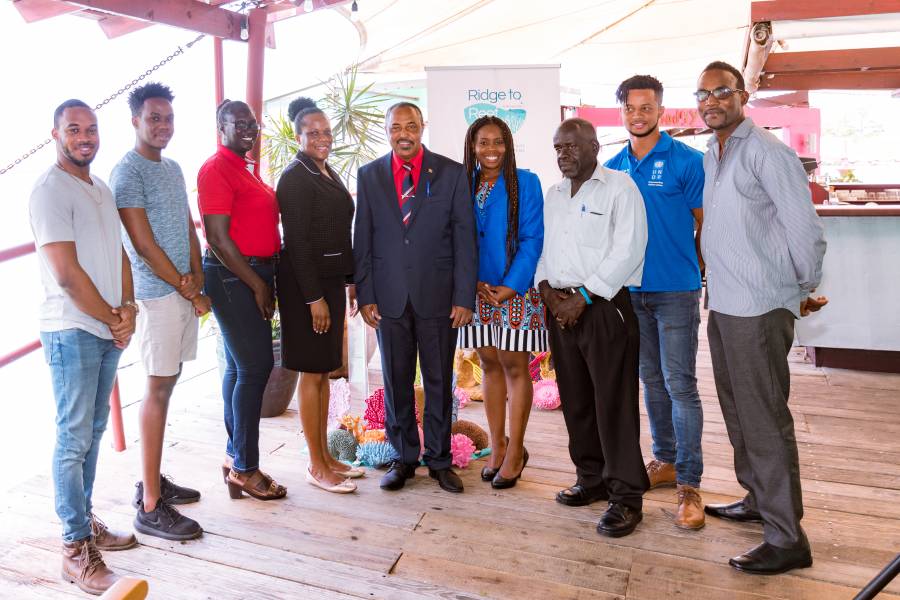